What is recurrent congestion?

Breathing consists of two phases: breathing in (inhalation) and breathing out (exhalation). Breathing involves the movement of air into and out of the chest, and is also called ventilation. The term respiration relates to the exchange of gases in the lungs that happens when you breathe.1

The respiratory system works so that you breathe in and out comfortably at rest where the least effort is required to move air – and you’re probably not conscious of your breathing. When you exercise, you need to move more air. To do this you can take bigger breaths or breathe more quickly – usually both.2

What happens when our nose is congested?

Most of us think we get a blocked nose as a result of a build-up of excess much mucus. Actually, it’s the swelling of the nasal lining that leads to nasal congestion. Viruses and bacteria, or allergens like dust and pollen, can all cause inflammation in the nasal passageways, which in turn produces swelling that reduces or even blocks the airflow through the nostrils.3

Having a blocked nose – with or without cold symptoms – can be a real drag on our energy, especially if it persists over time. It not only interferes with our daytime activities, leaving us feeling thick-headed and slightly breathless, it keeps us awake at night, as well.3

Causes of a long-term blocked nose include:

Other causes of a long-term blocked nose include:2

How can I prevent persistent nasal congestion?

Here are some steps you can take to help prevent or reduce nasal congestion all year round:6

1. For cold and flu, maintain a good hygiene:

2. You can look to take the following steps at home to help manage persistent nasal congestion:2

3. Regular nasal irrigation can also help manage the symptoms of persistent nasal congestion by helping to wash away trapped air pollutants from your nose.7

How can I relieve frequent nasal congestion with Otrivin?

Otrivin Seawater with Eucalyptus is a preservative-free nasal spray that gently and naturally cleanses nasal airways and restores your nose’s filtering ability against everyday air pollution and allergens. Cleanse and restore your nose everyday so you can breathe cleaner.*8 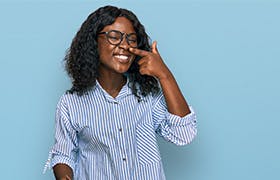 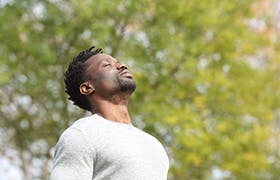 What are the causes of air pollution? 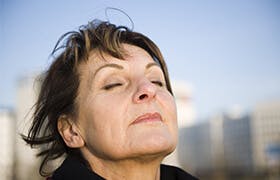